PUL-A-PUMP® was originally founded in 1992 by Jeanne & Robert Wilbert in Stockholm, New Jersey. As a young pump installer, he was looking for a simple & easy device to assist in his pump business. Beginning in 1988, countless hours of design & field testing were conducted until 1992, when Robert was finally ready to produce his track belt pump puller.

In 2014, after years of manufacturing, Jeanne & Robert were ready for a well-deserved retirement. Paul Gerner contacted the PUL-A-PUMP® company to purchase a machine for his pump replacement business. Upon discovering the only way to have this valuable tool was to buy the company, Paul did just that. He moved the company and the manufacturing to his hometown of Coudersport, Pennsylvania.

Wanting to maintain their high standards, Jeanne and Robert made several trips to Northcentral Pennsylvania to help set up the new facility and guide Paul through the manufacturing process of these outstanding machines.

QUALITY PULLING MACHINES YESTERDAY, TODAY AND INTO THE FUTURE

Today, PUL-A-PUMP® continues to provide the highest-quality well pump puller products in the industry. We focus on horizontal lifting and lowering of pipe, tubing and pumps in wells safely and securely in all types of environments.

Contact PUL-A-PUMP OF PA INC. to learn more about our products and commitment to each and every customer. We can provide the water well lifting machines and accessories you need here. We provide our portable pump pulling machines to customers in all 50 states as well as Canada, Europe, Asia, Australia and South America, we are a supplier to the world. 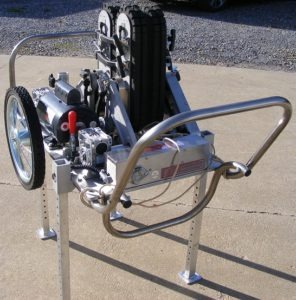